When pure, thorium is a silvery white metal that retains its lustre for several months. However, when it is contaminated with the oxide, thorium slowly tarnishes in air, becoming grey and eventually black. When heated in air, thorium metal ignites and burns brilliantly with a white light. Thorium oxide (ThO2), also called thoria, has one of the highest melting points of all oxides (3300°C) and so it has found applications in light bulb elements, lantern mantles, arc-light lamps, welding electrodes and heat-resistant ceramics. Glass containing thorium oxide has both a high refractive index and wavelength dispersion, and is used in high quality lenses for cameras and scientific instruments.

Thorium oxide (ThO2) is relatively inert and does not oxidise further, unlike UO2. It has higher thermal conductivity and lower thermal expansion than UO2, as well as a much higher melting point. In nuclear fuel, fission gas release is much lower than in UO2.

The image below shows a schematic of a liquid-flouride thorium reactor (LFTR): 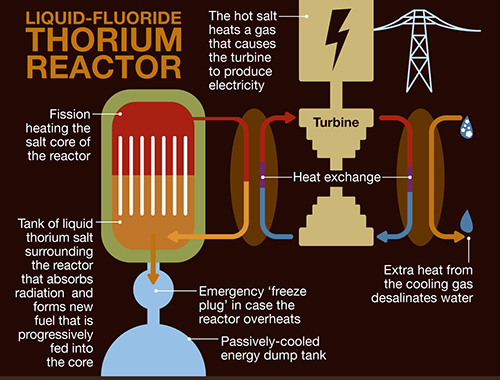 Thorium fuel cycles offer attractive features, including lower levels of waste generation, less transuranic elements in that waste, and providing a diversification option for nuclear fuel supply. Also, the use of thorium in most reactor types leads to extra safety margins. Despite these merits, the commercialization of thorium fuels faces some significant hurdles in terms of building an economic case to undertake the necessary development work.

Nevertheless, the thorium fuel cycle offers energy security benefits in the long-term due to its potential for being a self-sustaining fuel without the need for fast neutron reactors. It is therefore an important and potentially viable technology that seems able to contribute to building credible, long-term nuclear energy scenarios.

With large quantities of thorium resources and relatively little uranium, India has made utilization of thorium for large-scale energy production a major goal in its nuclear power programme, utilising a three-stage concept:

In all of these stages, used fuel needs to be reprocessed to recover fissile materials for recycling.

India is focusing and prioritizing the construction and commissioning of its fleet of 500 MWe sodium-cooled fast reactors in which it will breed the required plutonium which is the key to unlocking the energy potential of thorium in its advanced heavy water reactors. This will take another 15-20 years, and so it will still be some time before India is using thorium energy to any extent. The 500 MWe prototype FBR under construction in Kalpakkam is expected to start up in 2014.