Updates From The Field

Drilling continues on the Cypress / Skyharbour Broulan Reef property with progress being seen to achieving depth on the McKenzie Island hole BR09-01. The hole is now at approximately 1295 metres in length with an azimuth of about 94 degrees and with a dip of 78 degrees. 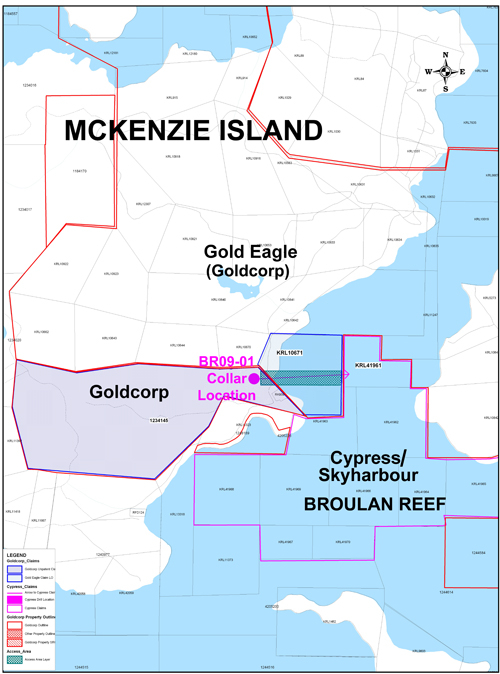 
The companies have had issues the last month in attempting to keep the mother hole heading in an easterly direction. The foliation, hardness and general rock character have tended to make the drill hole deviate to the north with regularity. The companies have had to install several steel wedges in this mother hole to be able to direct the drill to the highly prospective geology underlying the "Thrust Package" within the Balmer Assemblage. This has attributed to slower meterage attained in the last few weeks on the Broulan Reef drilling.

However, the companies seem to have now overcome these structural dilemmas and drilling is continuing to head in the designated easterly direction. The drill core indicates that the known iron formation has now been intersected at 1221 metres. The Balmer Assemblage is expected in the next few hundred metres of drilling.

The anticipated length of this mother hole will be approximately 2700 metres. A series of wedge holes will be established from this main hole to allow Cypress and Skyharbour to properly explore the geologic horizon immediately below the existing "Thrust Package" within the Balmer Assemblage of rocks. The companies believe that the area immediately under the Thrust Package is highly prospective for the gold hosted in the Bruce Channel deposit owned by Goldcorp adjoining Cypress / Skyharbour property on our north boundary.