Updates From The Field

Vancouver, BC - Skyharbour Resources Ltd. (TSX-V: SYH) (OTCQB: SYHBF) (Frankfurt: SC1P) (the “Company”) is pleased to invite the investment community to the PDAC Conference in Toronto from March 4th to March 7th as well as the Uranium Night Reception following the conference on Monday, March 5th at the Lucky Clover Irish Sports Pub in Toronto from 4pm to 7pm.

To RSVP for the Uranium Night Reception, please email: nfindler@sentinelmarket.com.

Skyharbour’s management will be at the Company’s booth #2629 throughout the PDAC Conference and we look forward to greeting investors and conference attendees. You can register for the conference at: http://www.pdac.ca/convention/registration/registration-information. The Company’s President and CEO, Jordan Trimble, will also be giving a corporate presentation on Monday, March 5th at 3pm in the South Building of the Metro Toronto Convention centre in room 801B.

Interview with Jordan Trimble and Mike Alkin - “The End of the Uranium Bear Market?”:

In a recent interview, Skyharbour’s President and CEO, Jordan Trimble, joins Mike Alkin, with Curzio Research, for the maiden voyage of “The Mike Alkin Show – Talking Stocks Over a Beer!”. The interview, titled “The End of the Uranium Bear Market?”, covers a wide array of topics including the current state of the uranium market, the supply/demand fundamentals, recent production cuts by Cameco and Kazatomprom, and a comprehensive overview of Skyharbour and the Company’s upcoming catalysts. You can listen to the interview here:

Skyharbour holds an extensive portfolio of uranium and thorium exploration projects in Canada's Athabasca Basin and is well positioned to benefit from improving uranium market fundamentals with five drill-ready projects. In July 2016, Skyharbour acquired an option from Denison Mines, a large strategic shareholder of the Company, to acquire 100% of the Moore Uranium Project which is located approx. 15 kilometres east of Denison's Wheeler River project and 39 kilometres south of Cameco's McArthur River uranium mine. Moore is an advanced stage uranium exploration property with high-grade uranium mineralization at the Maverick Zone with drill results returning 6.0% U3O8 over 5.9 metres including 20.8% U3O8 over 1.5 metres at a vertical depth of 265 metres. Skyharbour recently signed option agreements with AREVA Resources Canada and Azincourt Energy whereby AREVA and Azincourt can earn in 70% on the Preston Project through a combined $9,800,000 in total exploration expenditures, as well as $1,700,000 in total cash payments and 4,500,000 Azincourt shares. Preston is a large, geologically prospective property proximal to Fission Uranium's Triple R deposit as well as NexGen Energy's Arrow deposit. The Company also owns a 100% interest in the Falcon Point Uranium Project on the eastern perimeter of the Basin which contains an NI 43-101 inferred resource totaling 7.0 million pounds of U3O8 at 0.03% and 5.3 million pounds of ThO2 at 0.023% contained within 10,354,926 tonnes using a cutoff grade of 0.01% U3O8. The project also hosts a high-grade surface showing with up to 68% U3O8 in grab samples from a massive pitchblende vein, the source of which has yet to be discovered. The Company's 100% owned Mann Lake Uranium project on the east side of the Basin is strategically located adjacent to the Mann Lake Joint Venture operated by Cameco, where high-grade uranium mineralization was recently discovered. Skyharbour's goal is to maximize shareholder value through new mineral discoveries, committed long-term partnerships, and the advancement of exploration projects in geopolitically favourable jurisdictions.

To find out more about Skyharbour Resources Ltd. (TSX-V: SYH) visit the Company’s website at www.skyharbourltd.com.


NEITHER THE TSX VENTURE EXCHANGE NOR ITS REGULATION SERVICES PROVIDER ACCEPTS RESPONSIBILITY FOR THE ADEQUACY OR ACCURACY OF THE CONTENT OF THIS SHAREHOLDER UPDATE. 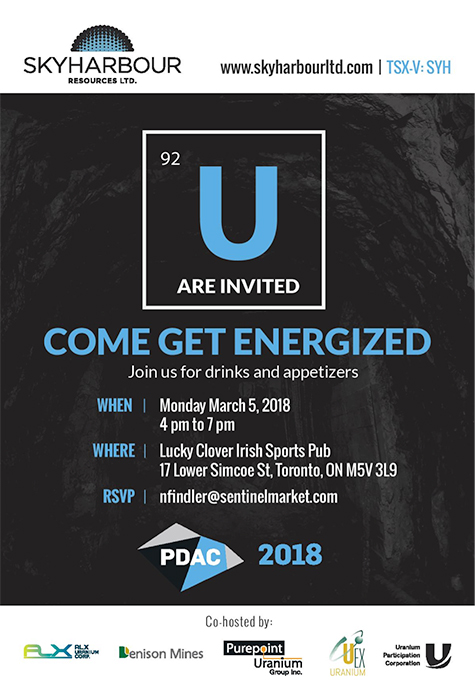